Golfers at every level work with Trevor “TA” Anderson because he helps them optimize their bodies to hone their craft.

If you think it’s simply a matter of chasing gains at the gym, think again. As a TRX Master Trainer and Golf Performance Expert, Anderson doesn’t want you to think that strength isn’t important—a golfer’s body has to be strong to handle the repetitive motion of practice swings—but he says that mobility and stability are the secret sauce to improving your game. And, after decades of coaching, the TRX Suspension Trainer™ and TRX RIP TRAINER® have emerged as two of his favorite tools for cooking up golf success.

In his early days of coaching golf performance, Anderson focused on rotational movement, since that’s the foundation of the golf swing. He quickly realized that stability was just as important because a golfer can’t generate rotational power without connecting to the ground properly. “I don’t care how much range of motion you have or how much speed you have, it can’t be controlled or consistent without stability,” he explained.

The Pilates instructor at a gym Anderson owned in the mid-Aughts introduced him to the TRX Suspension Trainer after she discovered the tool at a fitness conference. Anderson didn’t give it much thought until he saw her cuing a client through TRX Hamstring Curls.

“She had all the tools: She had the reformer, the chair, the little hoop thing that you do your inner thighs with. She had all these different Pilates tools, but she was using the TRX, and I couldn’t figure it out,” Anderson said.

He decided to try it out for himself when locking up the gym one night.

“I waited until everybody left, I snuck in there, put my heels in the straps, and I did a few hamstring curls. Literally, on the sixth rep, one of my hamstrings locked up and then on the eighth rep, the other one locked up. I could not believe the activation that was happening.”

Anderson was floored by how a tool as simple as the straps could challenge the posterior chain,  and realized its potential for golfers. After some time experimenting with the straps, and using them with his golf clients, Anderson completed his master trainer certification and was recruited to develop Suspension Trainer golf programming for TRX.

Already a Suspension Trainer devotee, Anderson began experimenting with the TRX RIP TRAINER a few years later when construction work at his gym thwarted his usual medicine ball training. “I tried to replicate some of the [medicine ball] exercises that I was doing with the RIP Trainer, and the first thing I thought was, “Wow, I can do all this.. This is awesome.”

The more he worked with the RIP TRAINER, the more he understood how it actually complements medicine ball training.

“The majority of the tension when you have a medicine ball in your hand is on the backend, when it’s loaded back. When you throw the medicine ball at the end range, it’s unloaded; you just have to manage balance. With the RIP TRAINER, it was exactly the opposite: There was less tension in the back because of the variable resistance of the band so the majority of tension was at the end range, like an impact position.”

Now, more than 10 years later, Anderson is the authority on integrating the TRX Suspension Trainer and the TRX RIP TRAINER into golf strength and conditioning. He loves the Suspension Trainer for reinforcing stability and good play posture through moves like TRX Rows and chest opener exercises. Plus, Suspension Trainer moves like hamstring curls can help golfers fire up the posterior chain to improve their grounding on the green.

“Folks really don’t understand how to activate the posterior chain. If they’re not running sprints everyday, and things of that nature, they don’t really know what it takes to activate back there. I think that anytime you can strengthen your posterior chain, you’re going to be helping yourself in golf,” Anderson said.

With the TRX RIP TRAINER, Anderson likes to teach golfers how to resist rotation. “The golf swing is about aggressive acceleration, but then subsequent deceleration. Being able to manage deceleration and balance is probably the number one way to maintain any of the power that you generate,” he said.

Yes, strength matters, but Anderson knows it’s  just one of the tools in a golfer’s arsenal. “There are a few more things on the list that I would consider enhancing before you focus on just getting strong. You’ve got to be able to move well through a range of motion, you have to be able to generate speed and power. You have to have great stability and finishing balance. Those are the types of things that get me fired up about golf and golf performance.” With the TRX Suspension Trainer and RIP TRAINER, Anderson is helping his golf clients improve in all of those areas.

What you can read next 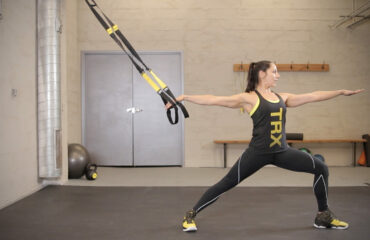 TRX Can Level Up Your Yoga Practice 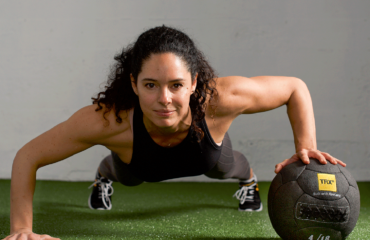 Why Choose a Kevlar Medicine Ball? 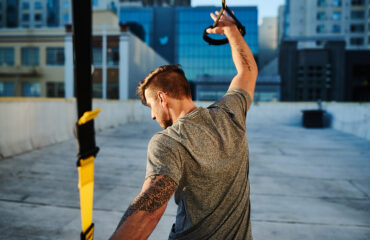